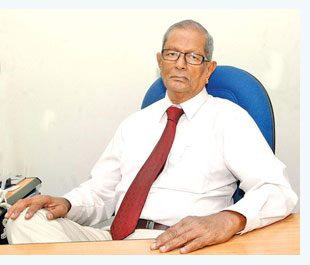 Sri Lanka is an island gifted by nature with an abundance of natural resources some are still untapped .Marine resources are yet another natural resource not harvested fully. Of this Fishing Industry take precedence over others .The need to go on fishing in the deep seas safely at a lesser cost for a bigger harvest were the fishermen’s woes 40 years ago. Mr. Neil Fernando who started his career as an apprentice in early 1960s with Walkers & Sons under Europeans had a dream of building a boat on his own. It seemed that craze for building boats was running in his blood. I can recollect the 25th Anniversary celebrations of the company held at the Negombo Municipal Community Hall some 24 years ago in a highly emotional speech he vividly described how he made his first boat and lend it to a fisherman to test it in the Sea and he lied down in a Canoe the whole night gazing at the clear night sky waiting fingers crossed for the safe return of the boat . To his surprise the boat returned safely in the wee hours of the morning surprising him with a big catch. He said in his speech that the fisherman’s good comment that it is a fine product encouraged him to continue building boats basically to fishermen . This fisherman is said to be living today. So he took this bold step in starting his own boat building business in a water front in the Negombo Lagoon – Neil Fernando & Company(pioneers in the manufacture of FRP boats–Fiber glass Reinforced Plastic boats in Sri Lanka) to cater to the local market mainly to fishermen. As the fire brand NEIL MARINE boats became very popular due to its stability, standard , strength and safety , the company had to expand its production facility at the main Boat Yard in Negombo due to increased demand. This 5S formula worked very well with Mr. Neil Fernando and orders started to trickle in from our neighbours -Maldives Islands.

Wide experience in boat industry over the years and the acquisition of new technology in boat building led to a remarkable improvement in the areas such as durability and strength of boats ensuring safety of the fishermen, ability of the vessels to venture into deeper seas economically for longer stays .

Years passed by and with the development of Travel & Tourism trade in the region there were more orders coming from foreign countries. In order to provide a better service and to get the benefits from export trade –Neil Fernando & Company Private Limited was formed in 1999 under BOI status to cater to foreign markets. Relentless hard work and with continued product development we managed to secure orders from international markets that led to the opening of two production facilities in Beruwela and Chilaw as well. Neil Fernando & Company and Neil Fernando & Company Pvt Ltd together have manufactured and sold around 39000 vessels over the years. We now have over 50 years of experience in the boat building industry in Sri Lanka. We are now one of the largest Boat Manufacturers & Exporters in South Asia.

Following have been our foreign partners over the last 25 - 40 years with whom we have been building boats for export to UK, Holland, Norway and Australia built to their and our own Designs.